How Much Does a Dumpster Weigh? Are You Unknowingly Putting Employees In Harm’s Way 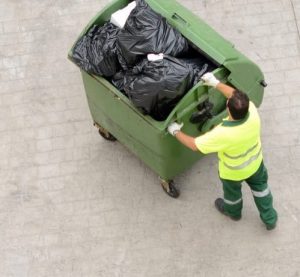 Dumpsters are the most convenient way to handle trash disposal for your business, office building or multi-family property. But how much do you understand about the task of dumpster moving? Are you unwittingly putting your employees at risk of serious injury?

Since dumpsters are on wheels and trash is contained within four sturdy sides, moving them from one spot to another may not seem like a problem. As with many other situations, appearances can be deceiving.

All-purpose dumpsters generally come in sizes of two yards, four yards, and six yards. These numbers sound relatively modest, partly because dumpsters are designed to be compact enough to fit in unobtrusive locations in the workplace.

Volume Does Not Equal Weight

You may be surprised to learn that dumpsters can accommodate weights of 400 to 1,400 pounds of waste. This means that the average male weighing 200 pounds would be moving up to seven times his total body weight.

Another factor to consider is that size and weight are not always proportional. For instance, a sheet of paper on its own is almost nothing so you can fit many of them into a box, but in bulk paper makes a heavy load.

Another example is cardboard boxes, which can take up a lot of space even when they’re broken down, but they’re relatively light. Such a load can be easily outweighed by a small container holding scrap metal.

Dumpster movers such as our popular WasteCaddyLite let a single employee easily move full dumpsters weighing up to 2,000 pounds with less risk of workplace injuries. Visit our website to learn more from our friendly sales engineers.