What to Do and Not Do When Moving Your Small Airplane 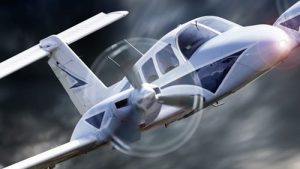 What to Do and Not Do When Moving Your Small Airplane

If you work at an airfield or fly small aircraft, you’ve probably towed a plane into position by pulling on the propellers—even though you’ve been warned not to. There’s a reason why professionals use an aircraft tug.

Never Pull a Prop by the Tip

When moving a small airplane by the propellers, there’s a greater risk for damage when your hand is farther from the hub. The blades bend, the bearings loosen, and you may need to replace the entire hub earlier than you should.

Pilots and ground crews debate plenty about tugging on the props. They all agree that you should at least hold it near the hub.

Push or Pull an Aircraft by Hand?

Your propellers can handle plenty of force, but why risk injury or accident? The exertion of twisting and pulling thousands of pounds in an awkward body stance can tear a muscle or build up to a repetitive stress injury.

Moving small aircraft by hand also makes it impossible to see in every direction. In tight spaces near hangar walls or other planes, it’s worth using a walk-behind aircraft tow for better visibility.

Get an Aircraft Tug You Will Want to Use

A user-friendly aircraft towing system will reduce the temptation to pull on propellers. The Lindbergh AircraftCaddy from DJ Products lets one person do the job easily. Our tugs come with options for 4,000 to 35,000 pounds, and for aircraft with or without wheel pants.

The AircraftCaddy removes most of the manual effort for towing small planes. For operations, it saves on employee time while reducing injury and damage risk.

For a better way to move small planes in and out of hangars, contact DJ Products or explore our site for battery-powered aircraft tugs.